DOT German Motorcycle Helmets are helmets reminiscent of the helmets that the German soldiers wore during the Second World War. These helmets have a very distinct look that cannot be mistaken and have taken favor with many motorcycle fans, especially the owners of cruiser bikes or choppers. Since the helmets are based on military helmets, they are all open-face helmets. 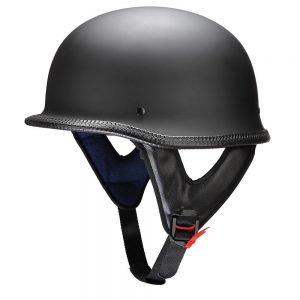 The actual roots of the present day German motorcycle helmet could be traced back to the nineteen twenties and thirties, after the German government commenced re-designing the First World War steel helmet donned by its soldiers. The newly designed “Stahlhelm”, which stands for steel helmet, was approved in 1935 by the German military authorities, and this helmet was officially called the M1935. This helmet is still the basis for the very popular modern day German motorcycle helmet.

This type of motorcycle helmet can be obtained in the marketplace in two distinct categories, namely DOT German Motorcycle Helmets and Novelty German Motorcycle Helmets. The difference between the two types is that the DOT helmets are manufactured according to improved safety standards as set out by the US Department of Transport, while the novelty helmets do not have the DOT seal of approval, and as the name suggests, are purely for novelty purposes. By implication then, these novelty German helmets do not have the same safety specifications as the DOT German style helmets and you may put yourself at risk when wearing them on the road.

Because of the current essential safety criteria in addition to eye-catching designs, a lot of these DOT-approved helmets could well be expected to be quite expensive. Interestingly enough, there are really several affordable German motorcycle helmets available in the market, and not merely the novelty German helmets, because recently even DOT German helmets have become more economical to buy.

If you are interested in a DOT German Motorcycle Helmet, listed below are some quality helmets of this type for you to look at. You may also